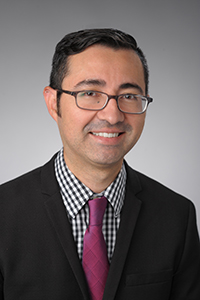 Jorge Castillo comes to the LGBT Resource Center from West Virginia University (WVU), where he served as the inaugural assistant director for the LGBTQ+ Center and oversaw the LGBTQ studies minor in the Center for Women’s and Gender Studies Program. Prior to his roles at WVU, Castillo has served as an instructor at the University of Connecticut, Wesleyan University, Fairfield University, and St. Lawrence University, where he taught courses in Latinx studies, gender, sexuality and queer studies, Latin American literature and film, and Spanish language. Castillo is a Ph.D. candidate at the University of Connecticut focusing on queer sexualities and globalization in Caribbean literature and film, where he also earned a master’s in Spanish literature and language. He received a B.A. from Our Lady of the Lake University in San Antonio, Texas, with a concentration in Hispanic culture and literature and Mexican American studies. 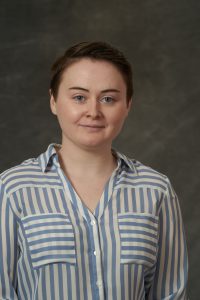 Elliott Hickey is the Program Coordinator for the LGBTQ Resource Center. They have been working in higher education ever since their sophomore year at SUNY Oswego as a Resident Assistant. Elliott received a B.A. degree in theatre with a minor in creative writing from SUNY Oswego, and she intends to pursue a master’s degree to continue their higher education career as an advisor. In their free time, Elliott loves to play Dungeons and Dragons, listen to true crime podcasts and snuggle with her cat, Luna.

Janeice Lopez is the graduate assistant for the LGBTQ Resource Center. Janeice is currently a master's student in the higher education department here at Syracuse University. She is originally from The Bronx in New York, and now lives in Naugatuck, Connecticut. As an undergraduate, she attended SUNY Cortland and received a B.A. in communication studies with a minor in women's gender and sexualities studies. She found her passion for higher education and student affairs after her first year of undergrad, when she became an orientation assistant. Since then, she has worked for numerous offices including Residence Life and Housing, Advisement and Transition, and the Memorial Library at SUNY Cortland. In her free time, Janeice loves reading, gardening and hanging out with her two pit bulls, Nala and Bella.