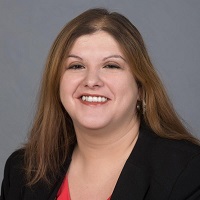 Tiffany joined Syracuse University in July 2019 as the associate director in the Office of Fraternity and Sorority Affairs. Before coming to Syracuse, Tiffany worked at Bowling Green State University as the coordinator for Fraternity and Sorority Life. She is originally from the Houston, Texas area and earned a bachelor of arts and master of education from the University of Houston, where she was very active as a collegiate and graduate student. Tiffany is a proud member of Gamma Alpha Omega Sorority and is actively involved with the organization as an alumna member. She is passionate about goal setting, planning and organizing. In her free time, Tiffany enjoys reading, writing, painting, and spending time with her family and pets.

Lael Pierce was raised in Yonkers, New York, a suburb just outside of New York City. Lael attended Utica College of Syracuse University where she Bachelor of Science in Management. Her commitment to higher education began immediately after graduation, as an undergraduate admissions counselor at her alma mater, where she was responsible for the recruitment of New York City students. She continued on as an academic coach, Student Services director, and access advisor for various institutions, leading students beyond their personal and academic challenges, and into success.

Lael is a member of Zeta Phi Beta Sorority, Inc., where she currently serves as the President of the Kappa Xi Zeta Chapter of Syracuse, New York, and previously as secretary for the sorority's New York State Executive Board. She is a member of the National Association of Parliamentarians.  She also serves the local community as the vice-chair of the PEACE, Inc. Eastside Neighborhood Advisory Committee, board member for the A Better Chance Program of Fayetteville-Manlius, board member of the Sankofa Reproductive Health and Healing Center and a volunteer for several local agencies. She believes in leading by example and with a heart of service.  She hopes to instill in others the historical and educational significance of fraternal organizations and encourage members to leave a positive, impactful legacy. Her favorite things to do include community service, mentoring, spending time with her niece, shopping, traveling, and anything pertaining to health and fitness.

Debbie has been with Syracuse University for 33 years. Debbie will serve as the primary council advisor for the National Association of Latino Fraternal Organizations (NALFO) and the National Pan-Hellenic Council (NPHC), as well as co-advise the  Interfraternity Council (IFC).

MaryJo grew up in Newburgh, New York, a suburb north of New York City. She received a bachelor of science in labor relations and human resource management from Le Moyne College in 1990. As an undergraduate student, MaryJo was social chairman and community service coordinator of Pi Nu Epsilon Sorority at Alfred State College. Before working as an office coordinator, she worked in the Labor and Employment Law department at Hancock Estabrook law firm.

MaryJo's passion is to volunteer at the Rescue Mission and “pay it forward” through community service involvement. She loves spending time with her family, lake living and boating on Oneida Lake, traveling, interior design, and watching men’s and women’s college lacrosse. She enjoys engaging and interacting with students in all facets of fraternity and sorority life at Syracuse University!

Robbie is originally from the small town of Hawley, Pennsylvania, and graduated from SUNY College of Environmental Science and Forestry (ESF), where he earned a bachelor of science in environmental biology. After graduation, Robbie most recently worked in higher education in Residence Life. Robbie is looking forward to his journey of studying higher education at Syracuse University and learning more about the different aspects of the field. In his free time, he can be found at the gym or running Spartan races. Robbie is proud to be an Eagle Scout and is still actively involved in the leadership of a Cub Scout Pack in his hometown.

Salvatore is from Long Island, New York. He attended SUNY Oswego for his undergraduate degree where he received a bachelor of science in business administration with a minor in creative writing. An important hobby of his is writing poetry and sending them to publications. Salvatore is very excited to study the multiple facets within the dynamic field of higher education and concentrate on his personal strengths and interests that he will learn throughout the program and industry. A fun fact about Salvatore is that he used to dance competitively and worked for a dance competition company where he traveled around the United States!